My Book Club Thoughts - Daughter of Destiny by Benazir Bhutto 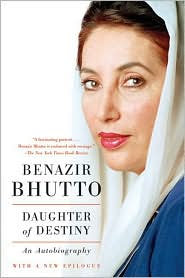 Benazir Bhutto's autobiography, Daughter of Destiny, made me think of so many things. The autobiography focused mostly on her father's rise to Prime Minister, the take over of his government by a dictatorship, her subsequent detainments, her mother and husband's incarcerations, the death of her brothers and escalation to power.

The book for me was a slow read. So many details and facts, that I didn't want to miss a thing. Benazir was an interesting person. Raised in a political family (think the Kennedys), well educated (Radcliff and Oxford), Muslim and a feminist. Many of her characteristics seem to be contradictory, but somehow she blended them together.

Thrust into politics after her father's murder, she became the people's politician. Her intentions seemed exceptionally pure. It is tough not to read this book and not like her. She endured so much, and yet rose above it all.

But part of her "wedding vows" for her husband:

"Asif must look after the children while I am out campaigning and not prevent me from going to jail, You must agree that Benazir will serve the nation"

"That is all right with me, for I will serve the nation by serving my wife."

I found it interesting that Benazir said, "Despite the great strides women have made, the double standards in viewing the conduct of male and female leaders obviously remains." This quote resonated with me especially considering the recent race between Hillary Clinton and Barack Obama.

All in all, I enjoyed my time with Benazir. As the book neared the end, I faught with myself over whether or not to read the final pages dealing with her murder. All I can say for certain, is that the world lost a very special person.
Posted by Esperanza at 3:14 PM

Canada actually had a woman prime minister for several months in the early 1990s -- her name was Kim Campbell. She became PM by becoming leader of the governing party; however, she lost the next general election. Still, it was a milestone. Since then, she was the Canadian consul-general in LA for awhile, & I believe she has also taught at Harvard.